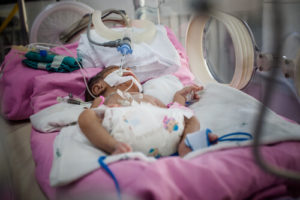 For children who have developing brains still making connections, these injuries can be devastating, debilitating and cause substantial harm. Often, these injuries are caused by situations that are unsafe and/or preventable.

If your child suffered brain injury due to negligent care at birth, you and your family deserve answers. To discuss the details of your case, please call Stern Law, PLLC at (800) 462-5772 today. We are here to answer your questions, without charge or obligation.

Why Is Cerebral Palsy So Prevalent? from The CP Lawyer | Stern Law, PLLC on Vimeo.

Some of the most common causes of harm to a baby’s developing brain before, during, or after delivery include:

When Should A Parent Contact A Cerebral Palsy Attorney? from The CP Lawyer | Stern Law, PLLC on Vimeo.

Children who were deprived of their full potential to live a normal life due to medical errors deserve the best care possible as well as a team of compassionate, yet aggressive, brain injury lawyers to fight for their rights. Stern Law, PLLC is committed to providing parents with answers, hope and the information they need to make informed decisions about their child’s future. Call (800) 462-5772 today for a free evaluation of your claim.