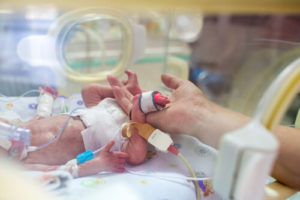 In the hands of an experienced obstetrician, more aggressive measures may be used to facilitate a quick, painless and injury-free birth. These may include the need to pull or twist a child (whether during a cesarean section or vaginal delivery) and even, if necessary, to use vacuum extractors and forceps to hasten a vaginal birth. When these devices are used improperly, or if a child is handled with excessive force during a vaginal or cesarean delivery, it can cause serious and sometimes permanent birth injuries.

If your child sustained a hematoma or other head injury due to improper birthing practices, please call Stern Law, PLLC at (800) 462-5772 to review the details of your case for free with an experienced birth injury attorney.

What is a hematoma?

A hematoma is an injury to a baby’s head that causes the blood vessels to tear and bleed. The actual “hematoma” refers to the collection of blood that occurs unnaturally in the head after sustaining some form of trauma. While not every hematoma is life threatening, the following are a list of the most serious types:

Timely diagnosis and treatment of a hematoma is critical to reducing the damaged caused by this type of injury.

What are intracranial hemorrhages?

Intracranial hemorrhaging, or bleeding within the brain, can occur as a result of pressure asserted on a baby’s head during labor and delivery. There are number of different types of hemorrhages that can develop, such as:

Symptoms of a hematoma or intracranial hemorrhaging

What are the risk factors and causes of hematomas and intracranial hemorrhaging?

Competent medical professionals should be aware of risk factors like these and be able to minimize or prevent a hematoma or intracranial bleeding.

Unfortunately, not every birth goes the way you would expect. Stern Law, PLLC has over three decades of experience representing birth injury victims in cases involving multiple forms of head trauma. For a free consultation, please call (800) 462-5772.