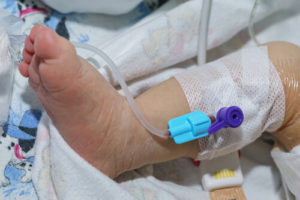 There are many factors that may have led to your child’s birth injuries, including the combination of genes from you and your partner that ultimately shaped your child’s genetics. For many years, heredity has been blamed for birth injuries that are, in fact, caused by medical errors and other tragic, avoidable causes.

When something goes wrong with your child, you want answers. You want to know what happened and why. Whether it be genetics or medical malpractice, it is understandable that you want the facts. Stern Law, PLLC can help. Please call (800) 462-5772 for a free consultation.

How are genetics and heredity responsible for causing your child’s condition?

Heredity commonly refers to the passage of traits from a parent to a child and involves many different factors. The scientific study of heredity is broadly referred to as genetics, looking at genes and how they are passed from parent to child; these lead to whether your baby has blue or brown eyes, is tall or short, tastes a soapy flavor when eating cilantro, or has the musculature to become a natural athlete. Genetics also leads to certain birth defects in some children.

According to the March of Dimes, there are 150,000 babies born every year with some sort of birth defect ranging from mild to extreme. The common definition of a birth defect is a malformation or abnormality of the baby’s structure, the function of organs and systems, or the metabolic process. These conditions can be the result of genetics, environmental, or unknown causes.

As more and more research is done, specialists are discovering that even the genetic causes of birth injuries are influenced by environmental factors and that these injuries may have been avoidable. The sad fact is that the cause of nearly half of all birth defects is unknown, and many others could have been prevented.

Some of the environmental influences and genetic anomalies, as well as unknown factors that lead to birth defects and birth injuries are as follows:

Were you told your child suffered cerebral palsy due to genetic factors? Learn about cerebral palsy and heredity to find out if you have a legal claim.

Often, the prenatal environment can impact the severity or long-term consequences of birth injuries. For example, there are a multitude of voluntary actions that can be taken during pregnancy, such as avoiding exposure to chemicals, pesticides, alcohol, tobacco, and illegal drugs (also known as teratogens), which can greatly influence whether a child develops birth injuries and birth defects. A doctor also may be able to determine risk factors and take precautions to minimize the severity of genetically predisposed conditions.

If you question your doctor’s explanation that your child’s traumatic birth injury occurred simply due to genetic factors, you have the right to find answers. Stern Law, PLLC can pursue truth, justice, and the compensation you deserve for the trauma your child suffered. Please call (800) 462-5772 to discuss the details of your case for free.