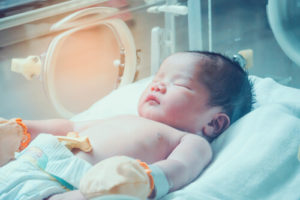 A birth defect, also known as a congenital anomaly, is defined as a functional, metabolic or structural abnormality that develops during or prior to birth, but usually does not present itself until the time a child is actually born. Birth defects can be caused by a wide variety of factors, including exposure to teratogens, or toxins.

There are more than 4,000 types of birth defects that are currently known, with some more serious than others. Generally speaking, birth defects often lead to significant mental, emotional and physical challenges and in certain cases, may be fatal. If your child developed a birth defect due to teratogen exposure, please call Stern Law, PLLC (800) 462-5772 for a free review of your case.

What exactly are teratogens?

Teratogen exposure is one of the more common ways in which fetal abnormalities can manifest. Specifically, teratogens are drugs or other substances that are capable of interfering with the normal growth and development of a fetus. Any agent or factor that causes malformation of an embryo is referred to as a teratogen, which is usually something in the environment that you may be exposed to during your pregnancy. Examples of teratogens include:

Over-the-counter and prescription drugs are common teratogens, and not surprisingly, a majority of women might use these substances at some point during their pregnancy. Although there are many drugs that are safe for pregnant women to consume, there are some that may pose a threat to the health and welfare of a growing fetus. A fetus that is exposed to teratogens may be born with a number of complications, including birth defects and developmental malformations. Typically, abnormalities arise during the first trimester when your child’s organ systems are forming.

Accordingly, doctors and other medical professionals have an unwavering duty to recommend or prescribe only over-the-counter medicine or prescription drugs they know are safe during each stage of gestation. The failure of medical professionals to adhere to this standard of care that all pregnant women and their unborn children deserve may result in significant liability should birth defects occur.

Teratogenic medications may cause birth defects in one of three ways:

With this in mind, the following are a list of some of the most common drugs known to cause birth defects in unborn children:

Several chemicals and environmental hazards are known to cause serious congenital abnormalities in a growing fetus. Whether through inhalation, skin absorption or ingestion, a pregnant woman can unknowingly expose her unborn child to teratogenic hazards, such as:

Alcohol, cigarette smoke and illegal drugs are highly toxic to a fetus and may cause serious and sometimes life threatening birth defects, as follows:

If you suspect that you were exposted to teratogenic drugs or other substances due to medical negligence, it is crucial that you consider your legal rights and options. Please contact Stern Law, PLLC by calling (800) 462-5772 for a free consultation.