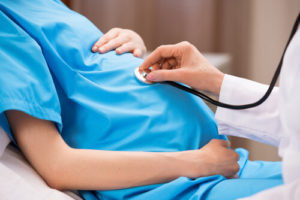 Pregnancy begins at the moment when an ovary releases an egg into one of her fallopian tubes. Once the egg meets with sperm and is fertilized, it then attaches, or implants, onto the lining of the uterus and continues to grow and develop for the next nine months. However, in about 2 percent of pregnancies, a fertilized egg implants in a place other than the uterus, most often in one of the fallopian tubes. Occasionally, an egg can implant in an ovary, the cervix or the belly. When an egg implants anywhere outside of the uterus, it is known as an ectopic pregnancy.

For women whose ectopic pregnancy goes undetected or undiagnosed, it’s possible for the growing embryo to cause the fallopian tube to burst. Without prompt medical intervention, this can lead to severe hemorrhaging and even death. If negligent medical professionals failed to diagnose ectopic pregnancy, please call Stern Law, PLLC at (800) 462-5772 for a free consultation to discuss your legal options.

What are the causes and risk factors associated with an ectopic pregnancy?

Most often, an ectopic pregnancy is caused by a damaged fallopian tube, which may hinder the ability for a fertilized egg to successfully pass through it to reach the uterus for implantation. It’s important to understand that there are a number of contributing factors that may explain why a fallopian tube may be damaged, such as:

What are the symptoms of an ectopic pregnancy?

If you are pregnant and happen to experience any of the above symptoms, it’s highly recommended that you speak to your doctor immediately. An ectopic pregnancy can have life threatening consequences without proper and timely medical intervention.

How is an ectopic pregnancy diagnosed?

Although a simple urine test can diagnose a pregnancy, it will not be enough to determine whether it’s ectopic. In order to find out whether you have an ectopic pregnancy, your doctor will likely:

How is an ectopic pregnancy treated?

Once you are diagnosed with an ectopic pregnancy, your doctor will likely act immediately in order to prevent harm. The most common treatments for an ectopic pregnancy are either surgery or medication to remove the embryo. The type of intervention sought depends upon the length of time you have been pregnant. If the condition is caught early, your doctor may prescribe an injectable medication called methotrexate to terminate the pregnancy. A blood test and several follow up visits will likely be required to determine if the medication successfully ended the pregnancy.

For an ectopic pregnancy that has advanced past the first few weeks, a surgical procedure known as a laparoscopy may be required. During a laparoscopy, the doctor will make a small incision in the belly button and manually remove the embryo from the fallopian tube. Should the ectopic pregnancy present developing or emergency risks, a greater or wider incision may be necessary to more aggressively treat the condition.

What should a woman expect after an ectopic pregnancy?

Regardless of the circumstances, losing a pregnancy is an extremely difficult situation for an expectant mother. For some women, it isn’t uncommon to experience a period of depression following the termination of their pregnancy. With this in mind, it’s highly recommended that you promptly speak with your doctor if you experience any of the symptoms of depression, such as

If you wish to become pregnant again, it’s crucial that you inform your doctor about your previous ectopic pregnancy. This way, a doctor can test to see whether any subsequent pregnancy is normal. If it is not, a physician should take immediate measures to prevent you from being harmed.

Pregnant women should take the following steps if they receive a diagnosis of an ectopic pregnancy:

If you experienced an undiagnosed ectopic pregnancy, you may wish to consider your legal options. For a free evaluation of your case, please call Stern Law, PLLC at (800) 462-5772 or contact us online.