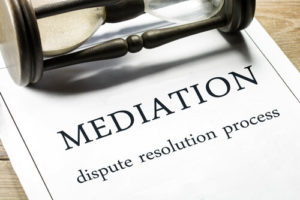 The most common strategies to achieve dispute resolution are demand letters, negotiation, mediation, and arbitration. All of these processes are designed to bring about resolution in an expedient manner. The process depends on the circumstances and how or whether the parties are able to form an agreement.

The attorneys at Stern Law, PLLC view negotiations as an adversarial process that favors tact, professionalism and skill. To find out how we can help you resolve a legal dispute stemming from medical negligence, please call (800) 462-5772 for a free evaluation of your claim.

Demand letters are used as a last resort before a complaint is filed. An attorney generally drafts a letter stating the complaint and outlines the history and evidence to support the case. The letter generally includes a date by which a reply or resolution is requested. Demand letters can begin a useful rapport between parties in an effort to settle a dispute prior to trial. Sometimes, the letter can provide an incentive to encourage an out of court settlement, trimming months or even years off of an extended legal process.

Negotiation is a voluntary process in which both parties in a legal dispute discuss methods to settle a case that is fair to all involved. During negotiations, the facts of the case are outlined along with possible solutions, with the goal in mind of achieving an equitable resolution.

It is strongly advised that both parties and their respective legal counsel are present during any negotiations. Unlike mediation and arbitration, there generally is no neutral third party to facilitate the negotiations. Your attorney will represent you as the party issuing the complaint, and will begin by presenting your side of the dispute clearly and without emotion. Successful negotiation usually requires that both sides attempt to understand the viewpoint of the other and seek compromise.

If a solution is agreed upon, an attorney should compose the terms of agreement to ensure all pertinent legal issues are decided and contingencies have been provided for. To be legally binding, all agreements should be in writing. An appearance before a judge may be necessary when your child is involved. The judge may choose to appoint an independent party to represent your child’s interests by reviewing the settlement and any documents prior to court approval.

Mediation is a process by which a third party, or mediator, assists both parties in an effort to resolve the dispute. When difficulties between parties arise, negotiations can break down and cause an impasse. Mediation may help to overcome that impasse and achieve a resolution. When in mediation, the opposing parties agree that an independent person shall operate as an intermediary, facilitating the discussions and aiding both sides in the goal of working towards a resolution. Mediation usually takes place in joint sessions; the mediator will explain the process to both parties and establish rules both sides must follow during the mediation process. Sometimes, a mediator will request separate sessions and move between you and the other party to help reach a mutually acceptable agreement.

Mediators are trained in the art of negotiation and dispute resolution. They help to identify the disagreements and restate them in impartial terms that allow negotiations to move forward. Mediators will facilitate the discussion, perhaps momentarily directing talks away from contentious points to solve other uncontested issues.

In most cases, mediation is a voluntary process, although there are instances where it may be mandated by a court of law.

Mediation offers the hope of compromise. Although mediation is usually described as a non-binding procedure, the agreement is legally binding once both sides consent.

Arbitration, much like mediation, is another way to achieve resolution outside the litigation process.

The arbitrator is an independent, neutral person, or panel, that acts much like a judge. The arbitrator is concerned with the legal aspects of the case and is highly focused on the evidence presented. Arbitrators are often retired or former judges, schooled and experienced in the law.

Unlike mediation, arbitration is usually described as a binding procedure as the arbitrator makes a decision on the outcome after hearing both sides of the case. The arbitrator or arbitration panel, like a judge, will usually give a written opinion. There are certain cases when arbitration is not legally binding.

Once arbitration commences, the process is similar to a trial in that both parties are afforded the opportunity to make opening statements and present evidence. For you, the process can bring about a resolution in a more timely fashion, which provides compensation earlier for use in managing your child’s condition.

Alternative dispute resolution offers several tools that can bring many cases to a satisfactory conclusion. There are, however, circumstances when alternative dispute resolution will be unsuccessful. In those instances, litigating the case in court is pursued. There are two types of litigation: civil and criminal. Most medical malpractice cases fall into the category of civil litigation.

In general, civil claims encompass dispute resolution over a dispute, disagreement, misunderstanding, wrongful act, injury or grievance that is not resolved amicably outside the court of law. They are filed for the purpose of obtaining compensation, injunctions, setting precedents, or deterrence. Civil suits rarely, if at all, end in jail or punishment.

Medical malpractice cases are rarely filed as criminal prosecutions. Criminal cases are considered crimes against society or state, and are generally litigation brought forth by a representative of the local, state or federal government. Defendants are typically tried in front of a jury. Trials end in a guilty, or not guilty, verdict. A guilty verdict leads to a sentence that may include fines, punishment, incarceration, or in some extreme cases, the death penalty. Punishment can also include retribution, deterrence, restraint, rehabilitation, and restoration.

Some circumstances can produce both a criminal and a civil trial. For instance, when a person is assaulted during an armed robbery, criminal charges are brought against a suspect, but the person injured can also pursue monetary compensation through a civil trial for their injury, and pain and suffering.

Stern Law, PLLC has both the passion and experience necessary to enforce your child’s rights in a birth injury case, either through dispute resolution outside of court, or if necessary, in the court room. It takes both medical and legal experience to navigate the legal system, and you can depend on Stern Law, PLLC to represent and advise you during this difficult and challenging time. Please call (800) 462-5772 for a free consultation.