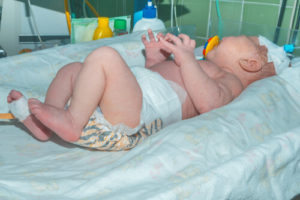 Oxygen deprivation is a leading cause of brain damage among babies. Failure to prevent asphyxia during labor can result in life-altering trauma.

Please call Stern Law, PLLC at (800) 462-5772 to find out if your family is eligible for compensation in a brain injury case involving your child.

What Are The Complications Of Birth Asphyxia? from The CP Lawyer | Stern Law, PLLC on Vimeo.

If a child receives insufficient oxygen, possible outcomes include:

How Often Is Cerebral Palsy Caused By A Lack Of Oxygen? from The CP Lawyer | Stern Law, PLLC on Vimeo.

Eighty-two thousand records of 5-year-old aged children were analyzed in a study conducted by Kaiser Permanente and published in the journal Pediatrics. This revealed that babies who experienced in-utero exposure to ischemic-hypoxic conditions (oxygen deprivation) were much more likely to develop attention deficit hyperactivity disorder (ADHD) later in life as compared to unexposed children.

In light of these results, researchers noted that the study demonstrates how children who suffered from lack of oxygen may suffer from greater harm than just structural and functional abnormalities of the brain, as demonstrated in previous studies. Moreover, the study provides that the association between oxygen deprivation and ADHD was most significant in preterm deliveries, breech births, and those involving umbilical cord complications. These associations were found to arise even after controlling for gestational age and other potential complications. Overall, researchers are touting this study as promising for obstetric specialists, who now have the ability to better identify newborn babies at risk for developing hypoxic condition-related ADHD and other serious conditions. Click here to review the entire study.

Hypothermia treatment, also known as brain cooling treatment, is most often used to address the complications that newborns face who suffer from birth asphyxia. Specifically, this type of treatment involves cooling down a child’s core body temperature to about 91 degrees Fahrenheit for about 3 days (or, a total of 72 hours).

Overall, the main purpose underlying this type of treatment is to allow an infant’s brain cells to recover after a sustained period of being deprived of vital and life sustaining oxygen. In other words, it avoids further brain damage from occurring should blood flow and oxygen levels be restored too quickly during the birthing process. According to medical research, newborns who suffer from oxygen deprivation should receive hypothermia treatment within six hours of birth and be at least 36 weeks gestation.

Sometimes medical mistakes can occur when a child receives hypothermia treatment, leaving him or her with life threatening and sometimes permanent injuries. These errors are typically arise as follows:

While there are numerous lawyers who are capable of filing birth injury cases, there are very few who truly understand the complexities and challenges associated with oxygen deprivation and birth asphyxia claim. Our legal team has the in-depth knowledge and experience to provide you qualified legal guidance as well as to answer questions outside of the legal realm. Call Stern Law, PLLC for a free review of your case today: (800) 462-5772.