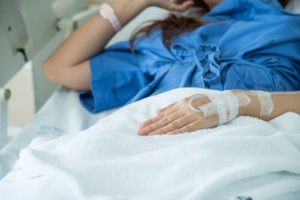 Placental abruption occurs when the placenta partially or completely detaches from the uterus. In most cases, this takes place in the third trimester of a woman’s pregnancy.

Without early and skilled medical intervention, placental abruption is a life-threatening condition for both the mother and her unborn baby. For more information about your legal rights in a birth injury case, please call Stern Law, PLLC at (800) 462-5772 for a free consultation.

What causes a placental abruption?

Medical experts cannot say for sure what causes a placental abruption. However, they have been able to identify various risk factors that may contribute to the development of the condition, such as:

What are the signs and symptoms of a placental abruption?

Until the severity of a placental abruption can be assessed, this condition is considered a medical emergency. In the majority of cases, a placental abruption will cause vaginal bleeding, ranging from a small amount to a sudden and intense gush of blood. However, for some women, bleeding may not be evident as the blood can, in certain circumstances, remain in the uterus and pool behind the placenta.

If you have any of the following signs and symptoms of a placental abruption, you should contact your doctor immediately:

How does a placental abruption harm a baby?

There are a number of ways in which a placental abruption can cause harm to an expectant mother and her baby, especially if left untreated. A woman may experience the following effects:

A baby may experience the following should a placental separation occur:

Placenta abruption is a medical emergency. Treatment for the condition will vary based on the severity of the abruption.

Placental abruption, preeclampsia and a devastating case of medical negligence

As recounted by Ken Stern: Although it is hard to imagine, sometimes doctors miss the signs and symptoms of complications that may put a pregnant woman at a greater risk of developing a placental abruption. One unforgettable case that was handled by Stern Law, PLLC is that of a 44-year-old woman who I had the privilege of representing several years ago.

The woman explained that, all of the sudden, after waking up in the morning, she felt a horrible pain in her abdomen and intense cramping. It was a sensation unlike anything she ever felt before, during her previous pregnancies. She further stated that after a few minutes of intense cramping, she started hemorrhaging, and by the time she made it to the hospital, her baby died due to the severity of her condition. Despite being nearly full term, her baby was not able to survive the abruption due to severe distress.

The lesson learned here is a poignant one. Had my client’s doctor taken the time to properly monitor her and taken into consideration her advanced maternal age and her obvious case of preeclampsia, her baby would be alive and well. Having represented clients like this woman, I decided to dedicate my life’s work to making a difference for families whose children have experienced birth injuries caused by medical malpractice.

Although no amount of money can compensate this woman for her loss, it can at least help her to afford the tools necessary to recover as much as possible from the trauma of losing her child. I am proud to say that I was instrumental in helping my client hold responsible those who caused the death of my client’s innocent child. Despite the fact that this child could not be saved, my goal is to educate the public so that future lives will be spared.

For more information about placenta abruption and a free evaluation of your claim, please call Stern Law, PLLC at (800) 462-5772 today.