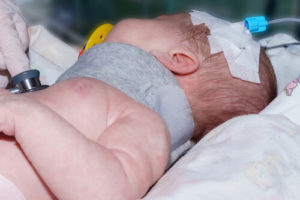 As recounted by Ken Stern

Early on in my career as an attorney, I represented a woman who had recently given birth to her third child. The mother told me that everything was normal during the course of her pregnancy, even at the time when she was admitted to the hospital.

As her labor pains intensified, she noticed that doctors and nurses who intermittently checked in with her did not seem to take her complaints seriously. At one point, the distressed mom-to-be was left unattended to for more than an hour, despite pleading with hospital staff that something did not feel right. When a nurse finally reviewed her fetal monitor, she immediately rushed to call for the doctor after noticing a sustained period of abnormal fetal heart rate patterns. When the doctor came into the room, he reviewed the monitoring strip and verified that something was indeed terribly wrong. The expectant mother was then taken to an operating room, where an emergency Cesarean section (c-section) was performed.

At birth, the baby was assigned an abnormally low Apgar score, which is a test medical professionals use to assess the health and well being of a newborn child. The test is administrated at one and five minutes after a child is born and examines a baby’s skin color, heart rate, respiratory effort, muscle tone, and reflexes. It was ultimately determined that the child, while in utero, had experienced severe fetal distress due to hypoxia, which is a condition where an unborn child does not receive enough oxygen during the birthing process. The baby’s umbilical cord had been wrapped around its head, drastically cutting off its oxygen supply. If a child is left without oxygen for a significant period of time, he or she may be left brain damaged, or could even die at birth.

Unfortunately, the woman’s child sustained serious brain damage due to the fact that her medical team failed to act in time to prevent the child from being injured. Although, I was able to resolve the matter in my client’s favor, no amount of money can ever compensate her for what happened to her baby. My client’s child would have otherwise been born healthy but for the lack of medical intervention that could have spared her significant emotional pain and financial stress.

The point of this story is simple. Medical errors can and sometimes do happen. Although the United States is touted as having among the best medical care in the world, medical mistakes occur more often than one may think. In fact, some studies suggest that the United States leads the world in the number of medical errors that occur, with more than 1.5 million people sustaining unnecessary injuries each year at the hands of negligent medical professionals. If immediate and responsible measures are taken, the lives of countless children – including my memorable client – will be positively impacted.

After having represented this client, I felt a compelling need to help others facing a similar situation. For more than thirty years, I have steadfastly dedicated myself and my practice to making a difference for parents and children affected by birth injuries.